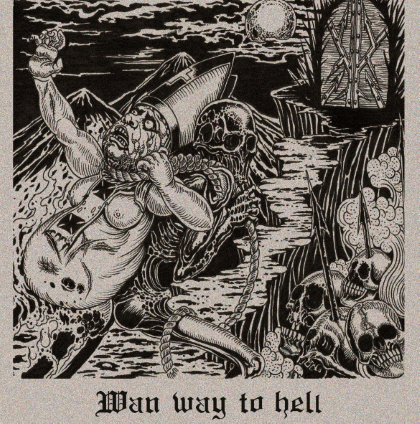 Sweden’s throwback black metal miscreants WAN released their third album, Wan Way to Hell, on February 10th courtesy of Carnal Records.  WAN formed in 2009 with the intent to bring metal back to its roots – raw, filthy, and in the gutter with a twist of punk mixed in for flavor.  They released their debut album, Wolves of the North, in 2010 and their sophomore release, Enjoy the Filth, in 2013.  They rerecorded Wolves of the North in 2015 and released it with Enjoy the Filth as part of a limited double LP.

Wan Way to Hell is a bit of a swing and a miss, to be frank (whoever that guy is); while it is apparent what WAN was attempting to do, blend black metal with more traditional punk and rock beats, it misses the mark and falls a bit flat.  The guitars and drums, while on a similar time signature, are almost competing with one another, as though they are playing a different song to the same metronome.  While considered individually, they are pretty damn good, but when they come together, it sounds disorganized and noisy.

This is not to say that Wan Way to Hell is a complete throw away, there are three tracks that stand out and show promise; “Piss on Your Grave”, “Inn I Idlen”, and “Wan Way to Hell”.  “Wan Way to Hell”, the closing track, quite honestly should have been the opener, it is well structured, organized, and gets the blood pumping.  While the three mentioned tracks may not completely make up for the other ten, they do prove that there is talent and that there is untapped potential with WAN.  While Wan Way to Hell may not be one our favorite releases, we do hope to see a fourth album from WAN, as the ability is there, it’s simply pulling it together in an album.

Written by Ken Kaizer for Bloodrock Media on March 21, 2017
Check out our website and follow us on social media