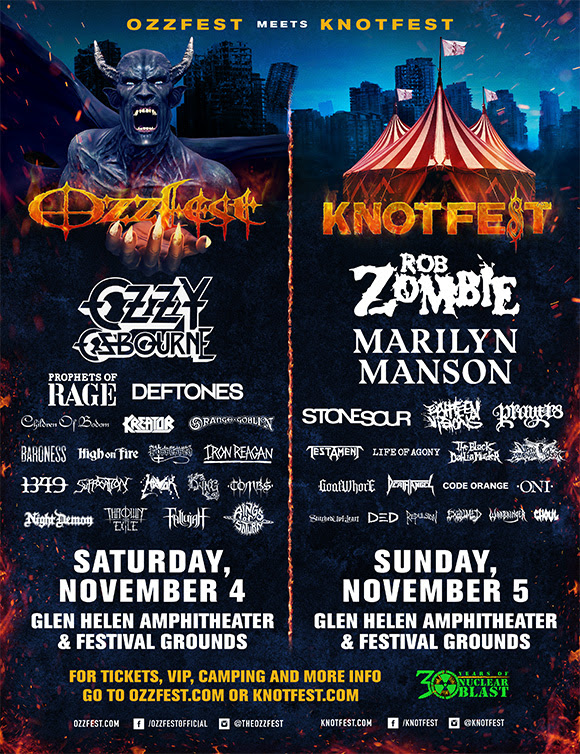 On November 4th and 5th, Tombs, Goatwhore, and Oni will appear at “Ozzfest Meets Knotfest” at the Glen Helen Amphitheater & Festival Grounds. Joining them on the bill is Ozzy Osbourne, Rob Zombie, Marilyn Manson, among many others. For more information, please visit: www.ozzfest.com or www.knotfest.com. Tickets will go on sale on Friday, July 14th @ 10AM Pacific Time.

Tombs recently released their fourth full-length, The Grand Annihilation – the group’s most experimental record to-date. The blasting, scathing yet melodic black metal savagery of opener “Black Sun Horizon” and “Way Of The Storm” are very much built to destroy, while wielding a poignancy that is undeniable – both of which stand in strong contrast to the uncomfortable post-punk squall of “Underneath” that showcases front-man Mike Hill’s Nick Cave/Ian Curtis-esque singing voice, while the likes of the throbbing “Saturnalian” and unnerving tribal thunder of “Walk With Me In Nightmares” stand in categories all of their own. While every track on The Grand Annihilation stands separate from those around it, it is still a cohesive collection, and at no point do the stylistic twists and turns undermine its coherence. For more information, please visit:metalblade.com/tombs

With their influences rooted in progressive metal, Oni‘s sound can be compared to the genre’s heavy hitters –The Human Abstract, Protest The Hero and Between The Buried And Me – yet they remain truly unique. With Jake Oni handling vocal duties, Martin Andres and Brandon White on guitar, Chase Bryant on bass and Joe Greulich on drums, they are also perhaps the first metal band to feature a xylosynth player, Johnny D, which adds an intriguing dynamic to the nine songs found on their latest full-length, Ironshore. On the album track “The Only Cure”, Lamb Of God vocalist Randy Blythe also contributes his inimitable style – resulting in one of the record’s heaviest moments. For more information, please visit: metalblade.com/oni

This Month on NAIL THE MIX: Renowned Producer Andrew Wade (Neck Deep, The Ghost Inside) Returns to Teach his Mixing Process for A Day To Remember’s “Right Back At It Again”