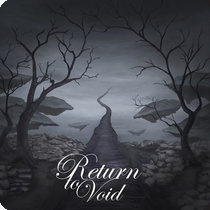 Finland’s own Return to Void’s story began in 2015, when Markku Pihlaja (vocals), Saku Hakuli (guitar), and Pasi Hakuli (bass) started playing acoustic versions of Bruce Dickinson’s (Iron Maiden) solo material under the name Dick & Son’s. After a few shows, the trio decided they wanted to be a full band, and recruited Kalle Kukkonen (drums) to join the group. Once they played a few more shows, they decided they wanted to write new and original material. They added a fifth member, Antti Huopainen (synth) and began writing their progressive metal, self-titled debut album, Return to Void.
The influence of Dickinson and Iron Maiden are undeniable throughout Return to Void; every track is well crafted and feels epic. Each song having it’s own aura or personality, ranging from the lonesome wanderer of “Sight of Immortal Sea” to the larger than life hero of “Throughout the Ages”. Each and every track feels as though you are at a party and meeting a different unique, dynamic, and interesting person every few minutes. The feeling of Return to Void is enormous; as though the group summoned Iron Maiden, DIO, or Black Sabbath and said ‘teach me oh great ones’, and teach them they did.
Return to Void is epic, exciting, unpredictable, and powerful; like a musical knight slaying a dragon. Fans of Iron Maiden to Megadeth will enjoy Return to the Void and should definitely snag a copy of it when it is released by Inverse Records on April 26th.
A lyric video for “Vail of Confusion” can be found here: https://www.youtube.com/watch?v=N5OcNrnml6s
Tracklist
1. Throughout the Ages
2. Light Bearer
3. Vail of Confusion
4. Consumer Heaven
5. Sight of Immortal Sea
6. All the Darkness
7. Human Alien Hybrid
8. Fools King
9. Liar
10. Return to Void
Lineup

Written by Ken Kaizer on March 8, 2017 for Bloodrock Media
Check out our website and follow us on social media

A PALE DECEMBER – THE SHRINE OF PRIMAL FIRE