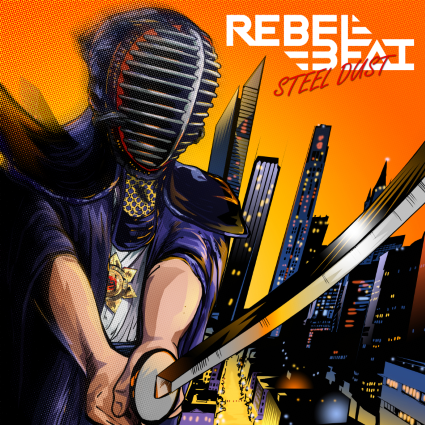 Rebel Beat, founded in 2013, is set to release their new album, Steel Dust, on May 5th courtesy of Pavement Entertainment.

True to the name, Rebel Beat delivers just that – mad beats – starting with the first song, “I’m the Law”. If you’re wanting more of a contemporary metal feel, the clashing drums and heavier riffs pick up in the second track, “Swinging Around”. The song won’t assail your ears with the typical metal growling, but you’ll still find the build-ups satisfying. Fiddler and Stan decide to show off their vocals in the song “One Man”, creating pretty harmonies over an upbeat tempo. “Steel Dust”, sharing the album’s name, will lead you through a range of vocals, take you down a straight, narrow road, and then lead you into “Melody”, which begins with deep drums and resounding riffs.

Rebel Beat displays their creativity and ability to cross over multiple genres on Steel Dust. They show off their technical talent, along with paying tribute to their own musical inspirations. You’ll be led through a journey of beats, resounding drums, abundant riffs, a spectrum of vocals, and even some rapping – if all of the above sound good to you, you’ll want to give Steel Dust a shot.

Check out Rebel Beat here:
Rebelbeatmusic.com
twitter.com/rebel_beat
facebook.com/rebelbeatmusic
youtube.com/user/rebelbeatvideo
Written by Har-Lena Quinn for Bloodrock Media on April 17, 2017
Check out our website and follow us on social media