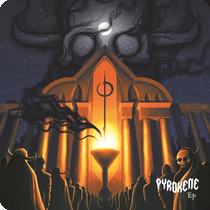 Slovenia’s experimental heavy metal quintet, Pyroxene, are set to release their self-titled EP, Pyroxene courtesy of Inverse Records on April 21st. Describing themselves as ‘solid metal’, they’ve created an experimental amalgamation of music that is truly their own, a repertoire ranging from blues to rock, that puts them in a class of their own.

Pyroxene is veritably an eccentric approach to heavy metal, a mishmash of 80’s hairband and power metal. Very prominent, theatrical, prog-esque vocals backed by heavy metal guitars fill Pyroxene’s five tracks. The first track on the album, “Fireborn”, is vocally a disaster, there is no nice way to put it. The high pitched backing vocals are atrocious, the only redeeming quality of this track is the guitars, which have moments of breakdown and guitar riff awesomeness. The stand out track on the album is the second, “Bullets Fly”, it is very reminiscent of Def Leppard, but with almost a punk twist on the vocals. The track starts with a super catchy beat and the guitar work is very cool, it is most definitely toe tapping, head bopping winner. The closing track, “Helium-3”, starts off strong, boasting pretty killer guitar riffs, but it is about the 4:02 mark that it vocally goes awry. It is at that point that vocalist, Jan Tehovnik, summons his inner David Coverdale (Whitesnake), and let’s out a high register cry and it isn’t glorious, it is just bad. While Tehovnik’s range is impressive, the ‘outburst’ doesn’t fit the track and is not a pleasant surprise.  It literally made me say outloud, ‘what the fuck is this sea of malarkey?!?!’.

It isn’t easy putting your art out there for others to judge whether it is good or bad; art is subjective and what is one man’s treasure will just be a blob of paint on canvas to another. Pyroxene is filled with killer guitar work by Kristjan Hacin and Andraž Kumar, so the technical foundation is there. Tehovnik has moments he shines on this EP as well, but it is when he is simply singing, not trying to be Mariah Carey on steroids. With the exception of “Bullets Fly” it is almost as though Hacin, Kumar, Hrovat, and Cizej are in one band and Tehovnik is another. There doesn’t seem to be harmony between the vocals and the music, it is possible that is an engineering issue or possibly it is the sound Pyroxene was going for. As mentioned earlier, art is subjective. While eclectic combinations can be good, they have to flow and move together, otherwise it just ends up a wreck. While Pyroxene isn’t completely awful, it isn’t something that would be considered good either. With that being said, I would give Pyroxene another shot at gaining a new fan because the potential is there, it is up to them to execute on it the next time around.

The video for “Helium-3” can be viewed here: https://www.youtube.com/watch?v=YAgMwIc19ys

Written by Ken Kaizer for Bloodrock Media on April 7, 2017

KIMI KARKI – EYE FOR AN EYE

RIOT – ARMY OF ONE