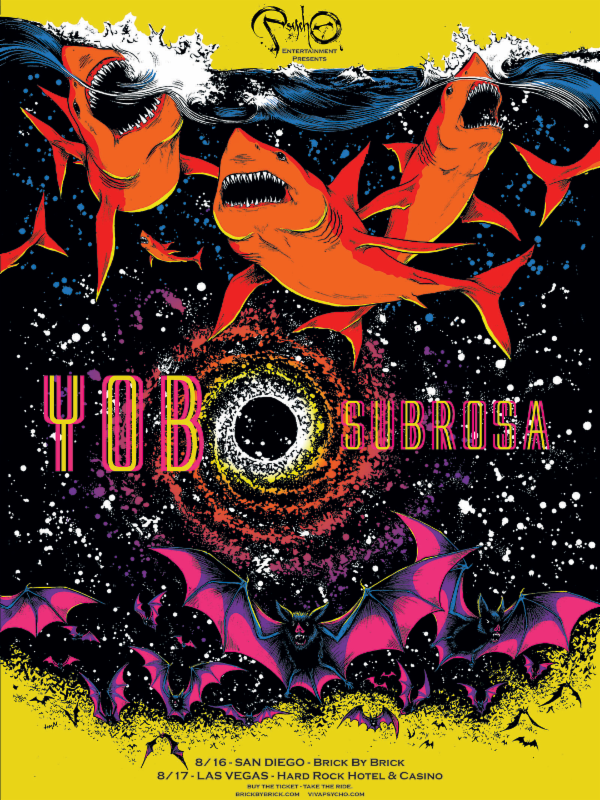 “The atmosphere at PSYCHO was electric. Not only was everybody seeing their favorite bands, but also all of their best friends, and in the most garish environment possible too.” – Metal Injection

PSYCHO LAS VEGAS will make its descent upon the Hard Rock Hotel And Casino Las Vegas in Las Vegas, Nevada from August 18th and run through August 20th, with a special peparty to be held on August 17th.

Adding to the four-day adventure, the curators of PSYCHO LAS VEGAS have added an additional show featuring cosmic doom trio YOB! The band with lay their purifying riff rituals upon the Hard Rock Hotel & Casino on August 17th directly following the pool party. Additional support will be provided by experimental doom practitioners SUBROSA.

Tickets to this event are extremely limited and will only be available online until this event has sold out. This concert is a separate ticket from the festival pass. For tickets, point your browser to THIS LOCATION.

YOB released their Clearing The Path To Ascend full-length via Neurot Recordings in 2014. On Clearing The Path To Ascend, YOB is as formidable as they’ve ever been, demanding the tandem attention of mind, body, and soul. Drummer Travis Foster wields his signature rhythmic furor here with bombastic precision while bassist Aaron Rieseberg coils around the sonic tide with an unforgiving churn all the while in a deadly synchronicity with singer/guitarist Mike Scheidt’s uncanny vocal range and its pendulous movement between the triumphant howls of a medieval madman and the earth-splitting growls of a war-battered titan. YOB is love.

SUBROSA is an experimental sludge/doom band from Salt Lake City, a city plagued by the tension of opposites. Within theSUBROSA crucible, sludgy low-end and high-volume lock arms with ultra-melodicism, folk, and experimental elements delivered through the haunting ambience of two electric violins. The band release their For This We Fought The Battle Of Ages album via Profound Lore last
year. The most colossal and engrossing SUBROSA album yet, For This We Fought The Battle Of Ages is a stirring and moving sonic monument released during these times and moments of desperation and uncertainty, reflected through the band’s heaviest and darkest sonic tapestry that is the chamber doom unit’s newest album.

Single day tickets for PSYCHO LAS VEGAS 2017 are on sale now and selling fast. Don’t miss out. Secure yours today at THIS LOCATION.

Payment options for PSYCHO LAS VEGAS 2017 are available through Affirm, with immediate delivery of tickets. More info at THIS LOCATION. Hotel discounts at the Hard Rock Hotel And Casino are also available using the code “psych17” (Note: You must use this special code at the time of booking; not when you arrive at the hotel). Book today at THIS LOCATION.

TERRIFIER Bring Their Weapons of Thrash Destruction To Armstrong MetalFest 2017