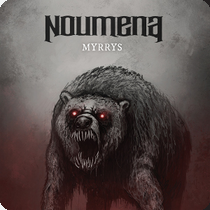 Finland natives Noumena are set to debut their album Myrrs on April 28th and it is undoubtedly worth the wait.  Myrrs is proof positive that phenomenal music has no borders and that music is a language in itself.

Myrrs is not just a metal album, it is a melodic metal dreamlike saga.  The guitars not only shred but also build up to big, beautiful harmonies that float into your ears like moths with razor blades for wings. The tasteful use of piano in tracks like “Syvalla vedessa”, in conjunction with the powerful and angelic voice of Suvi Uura, is like floating on a cloud. But don’t get too comfortable, for it is not long before those beautiful dreams become harrowing nightmares with the raw grit of Antti Happanen’s vicious growls and Tuukka Tuomela’s hard hitting riffs that strike like lightning. Throughout Myrrs the sleek transition between guttural and harmonic clean vocals with riffs to match is just fantastic.
Myrrs is a well crafted melodic metal masterpiece, each track building the mood and evoking its own genuine emotional response; whether that be the urge to mosh with tracks like “Metsan viha” or being on the verge of tears with the heartfelt somberness of “Sanansaattaja”.  Together, these nine tracks, build a world of their own, becoming more than just another metal album but a fully cerebral adventure that every music lover should partake.
Tracklist