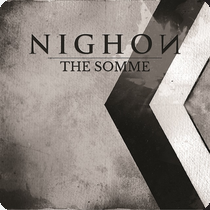 The latest release from Finland’s symphonic shock metal band Nighon entitled The Somme is an epic and ambitious undertaking, a grand thematic album based on the turbulent times of both World Wars and at times war in general. While it definitely does not fall under the “easy listening” umbrella it nails exactly what it sets out to do: It’s emotion driven, adrenaline pumping throughout and even the most somber moments are still crackling with static energy. Honestly that is the beauty of The Somme, it, like all great works of art. can be dissected into parts that are high quality but once taken in together, it becomes something greater than the individual parts.
Amazing tracks like “Lest We Forget” or “Blow Them to Hell” will get your blood pumping without fail and one can easily understand why a sick throwdown like “The Greatest of Catastrophes” was chosen for the album’s first single, but the beauty of The Somme comes from the entrancing nature of the ride the entire album takes you on. It is like a good night at the cinema. Adding to the impressiveness of The Somme is the way Nighon chose to end it, considering the dramatic aura and theme, it would have been easy for them to conclude on something slow and bleak, instead they bring the album to a close with beautiful vocals in tracks “Tragedie” and “Somme” (don’t let the names fool you), which considering the high spirits and optimism of the Allies and their respective post WWII, it is just fitting.

Rarely does a concept album come together as well as The Somme, especially without feeling pretentious or forced. Every single track on this album is well crafted and brilliantly put together. Pick up Nighon’s The Somme on May 5th because this album is something no metal fan will want to miss hearing.

The brand new music video “The Greatest Of Catastrophes” is available here: https://youtu.be/6JCvH4g-glQ

Written by Ken Kaizer for Bloodrock Media on March 9, 2017
Check out our website and follow us on social media

HE WHOSE OX IS GORED – PARALYZER SEVEN INCH