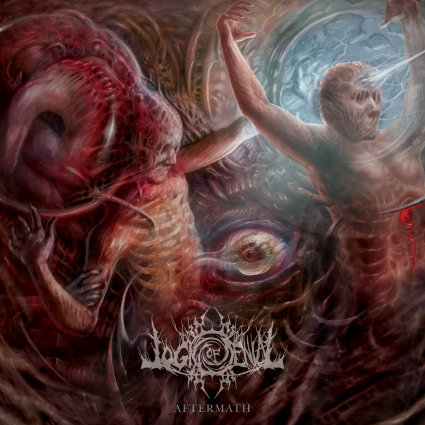 Dropping worldwide June 9th, Logical of Denial’s release Aftermath hits harder than a shotgun slug and with the slicing precision of a surgical scalpel. Logic of Denial are masters of their craft, brilliantly perfecting the art of melding complex music with simple, yet effective vocals. And if Aftermath is any indication of what this summer is going to be like, holy hell is it going to be one hell of a scorcher!
Aftermath is boiling over with deliciously crafted tracks like “Assenza (The Sufferance Overture)”, which takes riffs, pounding bass, and drums, which by all rights should be a calamity of sound and somehow morphing them into enticing madness. Tracks like “Immaculate”, “Gorging on Innocence”, and “Euphoric Aberrant Synthesis”  are basically the soundtrack playing on the train ride to Hades and Mattia Gatti’s brutish vocals serve as the train conductor’s reminder of impending doom and an eternity of suffering.
If there is a downside to Aftermath, it is the fact the vocals tend to be fairly monotone, meaning there’s not much depth to the ole rabid growls. This is but a minor nitpick, one of personal opinion, and to be fair, inconsequential. Aftermath isn’t the type of album listened to for heartwarming lyrics or breathtaking vocals, the exact opposite is true really. Gatti’s trademark gutturals, while a teeny tiny bit mundane, serve as the driving force behind a flurry of frenzied sonic assaults.
If you are looking for some Top 40, radio friendly, or easy listening tunes then do not embarrass yourself by thinking you’re ready for Aftermath, every second of this album is too much for you and you will more than likely have nightmares or at the very least ugly cry for the protection of your mother’s bosom. But if you’ve got the stones for some truly heavy metal then you are about to hit the gory Italian stallion jackpot with Logic of Denial’s Aftermath and you need to put June 9th on your calendar to pick this one up!
The track “Devouring Seeds of the Apocalypse” can be seen here: https://www.youtube.com/watch?v=NAJqLVC7Hks
Tracklist:1. Abscission2. Devouring Seeds of the Apocalypse3. Gorging on Innocence4. Miroir5. Sufferance6. Assenza (The Sufferance Ouverture)7. Larvae of Eden8. The Decaying Drama (Pt. I: Quietus – Pt. II: Antinferno)9. Defilement10. Violating the Canvas of Forgotten Purity11. Immaculate12. Euphoric Abhorrent Synthesis
Lineup:
Mattia Gatti – Vocals Alessandro D’Antone – Guitars Marcello Tavernari – Bass Marco Carboni – Guitars
Check out Logic of Denial here:
www.facebook.com/LogicOfDenialBand
www.comatosemusic.com
Written by Ken Kaizer for Bloodrock Media on April 7, 2017
Check out our website and follow us on social media