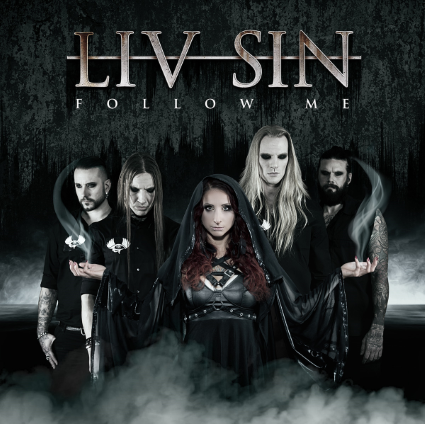 LIV SIN, the newest project of former Sister Sin front woman, Liv “Sin” Jagrell, is set to release their debut album, Follow Me, on April 28th via Despotz Records. LIV SIN has a modernized metal sound; combining old school heavy metal, thrash, black metal, and mixing in modern elements in order to create something that is their very own. Mixing of old and new musical styles is becoming more popular with bands like In Flames and Pagan’s Mind leading the charge; LIV SIN is set to successfully march in to battle right alongside them.
Follow Me is an excellent blend of harmonious yet haunting vocals and ferocious guitar riffs that would make Dio proud. Tracks like “Let Me Out” are as catchy as they are adrenaline pumping, boasting forceful riffs which build up to addictive outro shreddage and a booming chorus. Sultry tracks like the silk covered fist of “I’m Your Sin” and the seductive “The Beast Inside” will have metal heads new and old stabbing themselves in the heart and thanking metal mistress LIV SIN for the pleasure of doing so. If that weren’t enough she’s also included a killer ode to the legendary Rob Halford in her duet cover of “Immortal Sin” with 69 Eyes vocalist Stefan Kaufmann.
The unique mixture of more “American” style of clean hard rock vocals combined with the Swedish metal guitar shredding creates a monster sound; a sound so colossal that even those that followed Sister Sin’s 13 year reign will find it new, refreshing and appealing. It doesn’t take long to realize that LIV SIN isn’t Sister Sin version 2.0; they are bigger, better, and Liv is bearing a brand new set of shiny fangs. LIV SIN is making a statement with Follow Me, one that is loud and clear, “I was metal, I am metal, and I am a force to be reckoned with”.
Tracklist
1. The Fall
2. Hypocrite
3. Let Me Out
4. Black Souls
5. Godless Utopia
6. Endless Roads
7. Killing Ourselves to Live
8. I’m Your Sin
9. Emperor of Chaos
10. Immortal Sin
11. The Beast Inside
Lineup
Liv “Sin” Jagrell – Lead vocalsPatrick Ankermark – GuitarsChris Bertzell – Guitars Tommie Winther – BassPer Bjelovuk – Drums
Check out LIV SIN on social media:
www.facebook.com/livsinmusic/
liv-sin.com/
Written by Ken Kaizer for Bloodrock Media on April 17, 2017
Check out our website and follow us on social media

HOLLOW – HOME IS NOT WHERE THE HEART IS