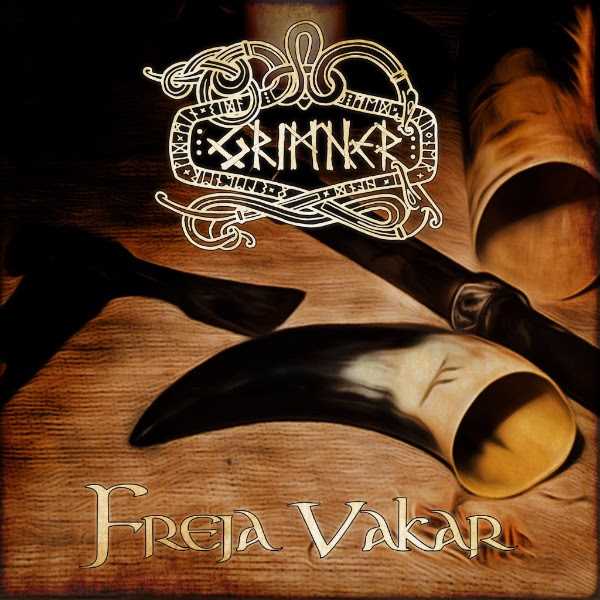 Swedish folk viking metal act GRIMNER have released a brand new single, “Freja Vakar” through Despotz Records.  The sextet have also teamed up with Metal Wani for the single’s premiere..

The band, who use such non traditional metal instruments as the flute, mandola and the bagpipes (all played by Johan Rydberg) were formed in 2008 in the town of Motala by vocalist / lead guitarist, Ted Sjulmark and drummer Henry Persson, releasing their debut album, ‘Blodshymner’ in 2014. With the arrival of 2015’s Ep, ‘De Kom Från Norr,’ the band hit the German festival circuit and supported the legendary folk metal outfit, Korpiklaani.  2016 saw the band tackle the world stage with their Despotz debut, ‘Frost Mot Eld,’ picking up new fans across the Americas and across the globe outside of Europe.

Regarding the non album track single, the band says, “Freja Vakar is one Hell-of-a-party-song that tells a story of lust and desire invoked by the magic of the runes, in an age long gone by. It’s a joyful, dynamic and quite instrumentally focused song that brings you back to the mead halls of old. May the song keep you warm until the release of the next Grimner album.”

“Freja Vakar” can be purchased on iTunes.

SHIPROCKED 2018 “A SHIPROCKED ODYSSEY” SET FOR JANUARY 21-25 ONBOARD CARNIVAL LIBERTY FROM PORT CANAVERAL, FLORIDA TO NASSAU AND HALF MOON CAY IN THE BAHAMAS