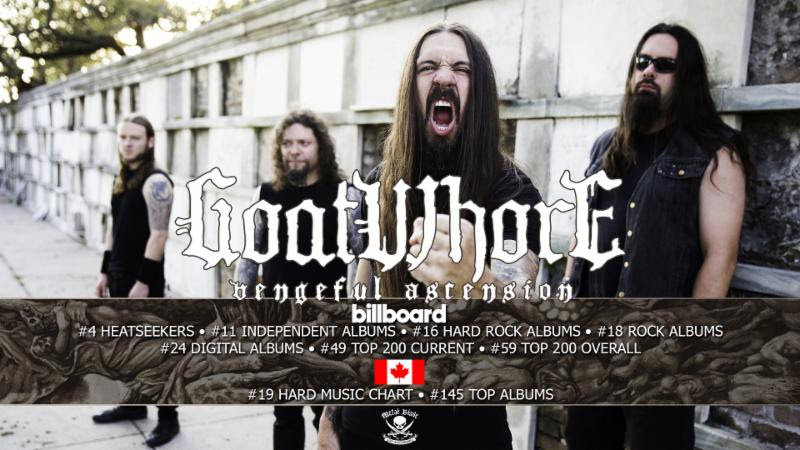 The band’s seventh full-length offering and second recorded reel-to-reel, Vengeful Ascension was captured at Earth Analog in Tolono, Illinois with longtime soundman and comrade Jarrett Pritchard (1349, Gruesome). A sonic manifestation of war, chaos, desolation, and emotional conflict, seamlessly bridging twenty years of the band’s signature brand of audio venom, Vengeful Ascension finds its members at their most accomplished both individually and as a cohesive unit. Guitarist Sammy Duet’s dense, sub nuclear riff work and possessed solo blitzes are at their most devastating, spiraling flawlessly and instinctually around drummer Zack Simmons’ and bassist James Harvey’s hammering rhythms, with front-man Ben Falgoust’s distinctly commanding roar, his acidic prose more enunciated than ever before, complimenting the apocalyptic proceedings.

“The album roars with the classic Goatwhore sound of searing shredding and screams of rage. The material also tries some new things, tossing in a bit of blackened atmosphere, adding to the philosophical questions the music dives into.” – Alternative Press‘ “10 Best Metal Albums Of 2017 So Far”

“Turning frowns upside down with metal steeped in gloom isn’t supposed to be a thing, but in incorporating more classic influences, Goatwhore has (in)advertently offered ‘Vengeful Ascension‘ as a link between battle jackets and monk robes. 8/10″ – Decibel Magazine

“…the most mature recording in the Goatwhore canon… Its combination of disparate subgenres from opposite ends of the structural and melodic continuum is masterful, resulting in a remarkably non-contrasting display of good and evil; that being good songs that sound as evil as all hell. 4/5″ –Team Rock

“…one of the band’s strongest offerings to date, and will surely hold up amongst their increasingly sizeable discography. 4/5” – Exclaim!

“‘Vengeful Ascension‘ is still wicked as fuck, never lacking in Hannemantastic guitar solos, and guaranteed to frighten your grandmother directly into her grave. But it’s also got peaks and valley and differing flavors, from the ghostly atmospherics and galloping riffs of the title track to the traditional black metal of ‘Abandon Indoctrination’ to the over-caffeinated speed metal of ‘Mankind Will Have No Mercy’ to the groove-thrash of ‘Decayed Omen Reborn’ to the pure fucking insanity that is the record’s closer, ‘Those Who Denied God’s Will.’ 4.5/5″ – MetalSucks

“‘Vengeful Ascension‘ is Goatwhore‘s most diverse and interesting work to date. The band proves that they can do more than just shred away from beginning to end, but build upon their foundation to introduce deeper chemistry… The record is one of those works that taps into the vein of human existence, and unleashes it in devastating heavy metal fashion. 4.5/5″ – New Noise Magazine