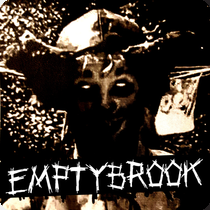 Finnish sludge metalers Emptybrook are set to release their self-titled EP, Emptybrook, via Inverse Records on April 17th.
Four of the five tracks on Emptybrook stand out; “Repeat”, “The Grand King of Fuckery”, “Smoking Weed with Numbskull Emptybrook in the Country Side”, and “Hit the Wall or Hit the Ground”.  The opener “Repeat” is up tempo and overflowing with playful riffs, starting albums with energy is always a good thing. “The Grand King of Fuckery” is heavy as hell and “Smoking Weed with Numbskull Emptybrook in the Country Side” is fast, both are thick and muddy like good sludge metal should be. All three tracks are absolute bangers. Just as Emptybrook seems to slow it down with “Hit the Wall or Hit the Ground”, the thought passes because the track kicks the energy back up again before it ends.
Finding inspiration from the Finnish low budget, B-movies of the 70’s and 80’s, Emptybrook uses a bit of cheeky humor to soften the rough edges of THE METAL, ensuring that they don’t take themselves too seriously and answering the age old question “is there even life without cheese?”. The answer is no, there is no life without cheese and Emptybrook is serving it it up better than most. This EP is proof that awesome heavy metal, or music for that matter, doesn’t require a ton of production work; if it is good, it stands on it’s own (just like low budget movies).
You will definitely want to snag a copy of Emptybrook at release so when these guys make it big, you can have that sense of smug superiority for being hip to their game before the rest of the world. Emptybrook, we sprinkle that shit on everything and you will too!
Check out Emptybrook here:
https://www.facebook.com/Emptybrookhttps://twitter.com/emptybrook
Lineup

Written by Ken Kaizer for Bloodrock Media April 15, 2017
Check out our website and follow us on social media