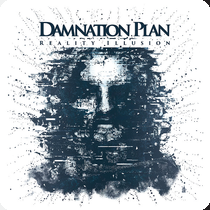 Finnish death metal mavericks Damnation Plan released their second full length album, Reality Illusion on March 10th courtesy of Inverse Records.   Four long years fans had to wait for their craving for more Damnation Plan to be satisfied…..and it was worth the wait.

On the rare occasion an album’s intro is so good that it gets the adrenaline pumping and primes the earholes for what is to come, you know you are in for a good time.  From the instant one hits play,  Reality Illusion, brings it.  A killer blend of heavy as hell, with tight melodies, and infectious grooves, Damnation Plan gets it right track after track.


Reality Illusion’s transitions are as smooth as silk; when one brilliant track ends another begins, without sounding redundant or stale.  It isn’t until the instrumental interlude “The Empowerment” begins that one realizes they’ve lost track of time, lost in the music, without an ounce of regret.  Even as the slower tempo,  “Maze of Despair”, coaxes you back into the glorious madness, it feels natural, it is where you belong.  There are so many killer tracks on Reality Illusion, it is difficult to pick a favorite.  “Rise of the Messenger” with it’s beautiful harmonies and the intense, roller coaster ride that is “Final Destination”, are gifts from Damnation Plan.

Reality Illusion is classy, meaningful, technical, and precise. To be honest, Reality Illusion should come with a warning label, CAUTION:  Contents may be highly addictive, resulting in deep reflection, severe headbanging, OCD like behavior, and a desire to mosh.

Written by Ken Kaizer for Bloodrock Media on March 13, 2017
Visit our website and follow us on social media