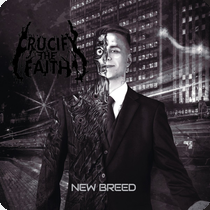 Every now and then you come across an album or a single that just digs itself into your brain in a way that you just cannot get tired of hearing it, that is Crucify the Faith’s EP New Breed.  Released on February 28th, the melodic deathcore quintet’s most excellent execution of being heavier than a freight train while being so groovy even the Devil himself would dance to it.  If you have been looking for something of that caliber, then your search is over, New Breed is it.

While New Breed is not perfect, it’s a little rough around edges with transitions, but considering this is Crucify the Faith’s first real release, that is almost nitpicking and is pretty damn forgivable, especially when there’s so much good to counterbalance any possible flaws. If anything the biggest flaw here is the EP is only 5 tracks long.  EP syndrome sucks big time when the songs are as killer as “The Strong Will Survive”, “New Breed”, and “Unreal”.

New Breed will leave listeners at the edge of their seats, craving Crucify the Faith’s rease of their first full length. As far as debuts go, it really doesn’t get much better than this! Snag a copy of New Breed with the quickness.