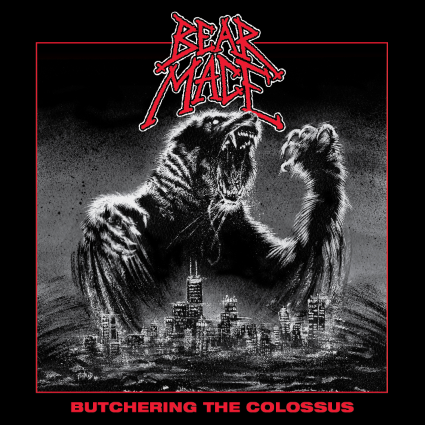 The Windy City’s mysterious five-headed beast known as Bear Mace self-released their full length album, Butchering the Colossus, on March 1st. The origin of Bear Mace dates back to 2012 when vocalist Lord Devourer and guitarist Crossbow Death became engaged in a heated debate about the use of guns during grizzly bear attacks on schools (Devourer was in favor of giving the bears guns, while Crossbow wanted a 24-background check and waiting period). Just before blood was shed, the two decided on a more productive, yet equally as violent, outlet for their frustrations. This is when Bear Mace was born and the two men proceeded to record a demo of intense, destructive riffs and snarled vocals rooted deeply in old-school death metal under the name Kodiak Killers. Finding themselves suddenly in demand and hungry for more human flesh, Devourer and Crossbow scoured the streets and sewers of Chicago until they found three more musicians as equally as demented as themselves to join the fold.
Butchering the Colossus is as lethal, raw, and savage as the name brings to mind. Free of lighthearted flash and dazzle, unapologetic in it’s sledgehammer heaviness, each track on Butchering the Colossus will plunge listeners deeper and deeper into the the hostile waters of a metal abyss. Butchering the Colossus is perfect execution of seek and destroy. Tracks like “I Bleed for Vengeance” and “Leave Nothing Here Alive” drown fans in unbridled brutality, spine severing riffs, and skull cracking breakdowns; none of which are for the meek. Butchering the Colossus will leave listeners ravaged but they will still beg for more. It is apparent that Bear Mace’s goal was to deliver eardrum blasting blasting, deliciously destructive metal, and Butchering the Colossus is undoubtedly a major success.
Bear Mace are not posers, they do not pretend, and they are not playing games; their sole intent was to pile drive heavy metal spikes into fans skulls, Butchering the Colossus does exactly that and more!
Tracklist
1. Death of a Constellation
2. Cyclone of Shrapnel
3. I Bleed for Vengeance
4. Butchering the Colossus
5. Leave Nothing Here Alive
6. Lord Devourer of the Dead
7. Wheel of Dispair
8. Anguirus the Destroyer
Lineup

Written by Ken Kaizer on March 24, 2017 for Bloodrock Media
Check out our website and follow us on social media

KIMI KARKI – EYE FOR AN EYE