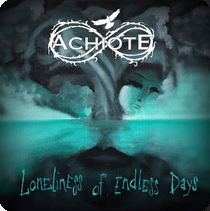 Achiote released their sophomore album entitled Loneliness of Endless Days courtesy of V.R. Label Finland on February 10th. Achiote is a Finnish metal band combining heavy and soulful 90’s rock, spiced up with norther romanticism. As the title, Loneliness of Endless Days implies, the album is about sadness and leaving things behind. The album comes from the band’s own personal experiences of illness, divorce, and drifting apart.


Loneliness of Endless Days is a bit unexpected, when one hears “Finnish” and “metal” together, the immediate assumption is that the music will be all about devil worshiping, destroy everything, and murdering foe. That is not quite what Achiote is about, which is definitely not a bad thing. Because melt your face off death and destruction is what is expected, it could be a disappointment to some when they hit play. For others, it will be a pleasant surprise, an against the grain Finnish metal band.Achiote may not be the next Emperor or Dying Fetus, that isn’t to say they aren’t a solid band. Tracks like “Desert Sun”, “Ghost Under the Sun”, and “Ocean Blue” showcase the groups ability to blend various musical influences into catchy, yet heavy hitting tracks. Providing a nice contrast to some of the more somber tracks on Loneliness of Endless Days, both of which exemplify the diverse capability of the band’s members.

As fans listen to this album they will hear that different can be good. Loneliness of Endless Days isn’t your typical Finnish heavy metal album, it has it’s own flavor, which makes it enjoyable in it’s uniqueness. There is very much an early Finger Eleven or Alice in Chains feeling to the album, which grunge fans will find endearing.

Written by Ken Kaizer for Bloodrock Media on March 13, 2017
Check out our website and follow us on social media