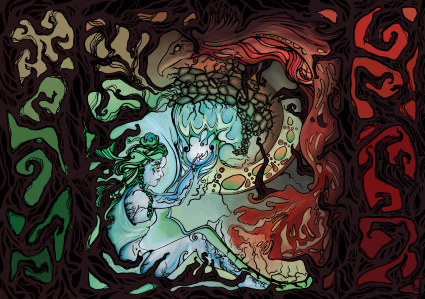 A Flourishing Scourge is releasing their first full length, self-titled album courtesy of Begotten Records on June 9, 2017. The album was recorded in a little over a week – setting: Brooklyn, at Gojira’s Silver Cord Studio. The album was engineered and mixed by Jamie Uertz of Gojira and Anthrax – with additional mixing by lead vocalist himself, Tye Jones. An enormous amount of talent was pooled together to mold this album into something fierce.
For metal lovers, this album will not disappoint. “Tidal Waves” opens with immediate growling, crashing drums, and heavy riffs, and doesn’t quit for the entire 9:53 length of the track. “To The Stench of a Rotting Corpse” opens with a beautiful, slow melody that prepares you for a softer song – before completely demolishing that thought with booming vocals and equally aggressive riffs that will induce mosh-like behavior, or at the very least, some serious headbanging –  regardless of where you are. The bass in “Insatiable” is going to make you move – whether you want to or not, whether you’re conscious of doing it or not. “Vacant” starts off with another teasingly beautiful melody – slow and inviting – before the deep, rumbling vocals turn up. “Solace” is going to end your journey with a mix between hard and soft – the perfect combination of lulling melody and breakdowns.
A Flourishing Scourge is a band that will satisfy your inner metal rocker while giving you a taste of the sweet stuff – in their melodies, that is. This band displays how talented they are by demonstrating the command they have over their instruments and the smooth transitions between soothing melodies and in your face metal. On this album they have created a perfect combination between the two, marrying them together effortlessly, it seems. As the songs change, it is barely noticeable, as if each one was made to follow the former. Check out this album, it truly is a wild, wonderful ride.
Tracklist
Lineup
Tye Jones – Vocals, guitar
Kevin Carbrey – Bass
Andrew Dennis – Lead guitar
Elijah Losch – Drums
Check out A Flourishing Scourge here:
http://www.aflourishingscourge.com/
https://www.facebook.com/aflourishingscourge
https://aflourishingscourge.bandcamp.com/
https://www.reverbnation.com/aflourishingscourge
https://twitter.com/a_scourge
https://www.instagram.com/aflourishingscourge/
https://www.youtube.com/channel/UCBmpo0HQhTpU7xW9taMTnHQ
Written by Har-Lena Quinn for Bloodrock Media on April 25, 2017
Check out our website and follow us on social media